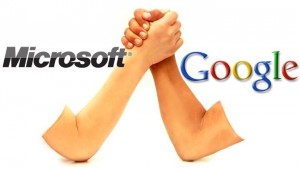 Everyone knows that Microsoft and Google were two super giant company.

I am going to let everyone know how Microsoft and Google start fighting? and who do they stop.

So that’s how the the fighting start.

Then in September 30, 2015, Google and Microsoft announced that they canceled all the law suit in Android and XBOX system.

Both company also says that they are going to find other way to fix Intellectual Property Rights related problem, one of the way is they have a Joint development project on Image Compress Technology without paying other patent fee. Base on our information, that Amazon and Netflix also join this development program. Both company also decided that they will talk about cooperate each other’s patent in European Market.

They also said that, “Two company had agree to start some cooperate work on some particular patent, hope we will cooperate each other in the future, to benefit our customer.”

But it looks like Bing still trying to take away Google’s Search engine market…..